Hurrah for Our Supporters! 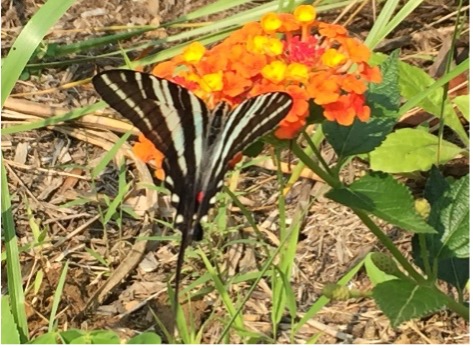 What: Butterflies of the Allen’s Creek Peninsula

Meet at the Allen’s Creek upper parking area at 11:00 AM.

Maximum number of participants: 10 (must register — members only). 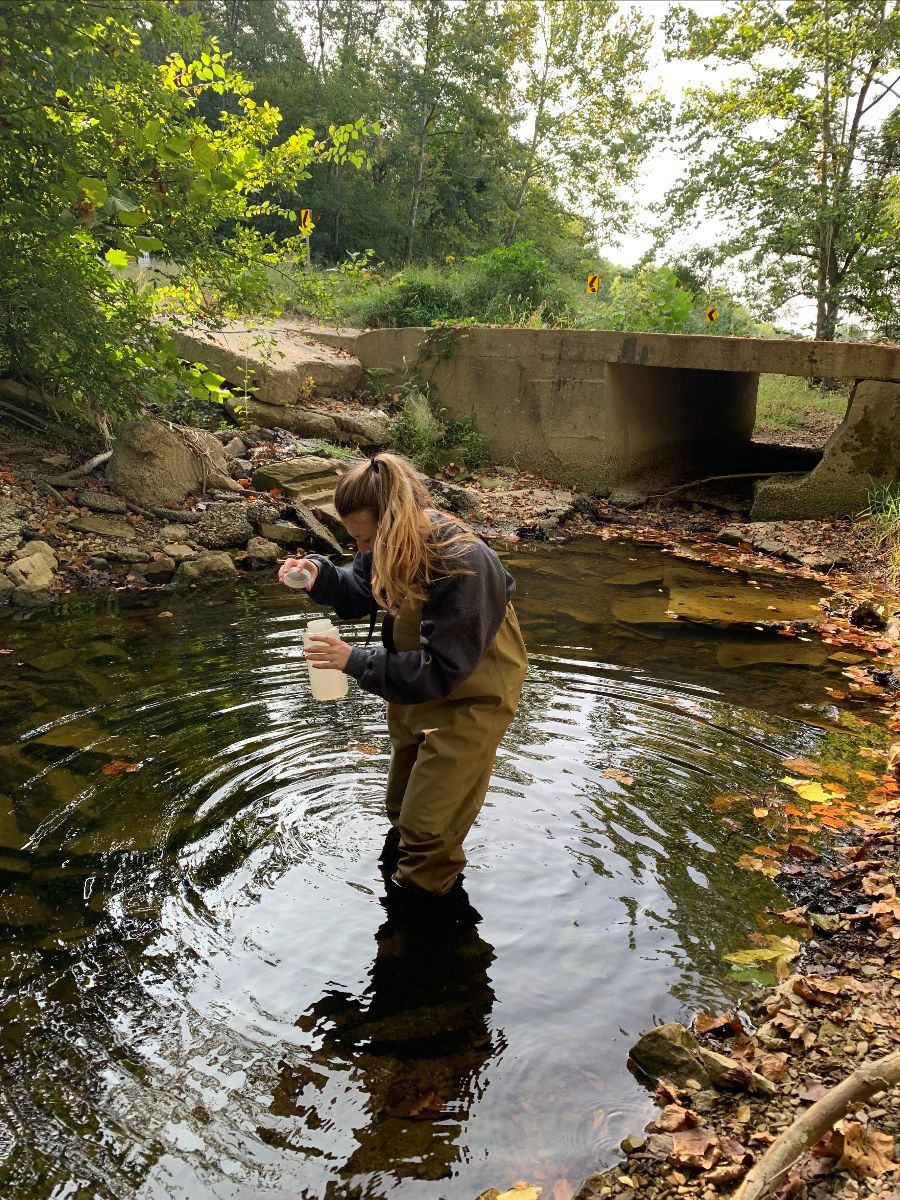 Spring is here and we are near the end of the water monitoring phase of developing a watershed management plan.  The IU Limnology Lab collected their last tributary sample this month, completing one year of monitoring North Fork Salt Creek, Middle Fork Salt Creek, South Fork Salt Creek, Crooked Creek, and the tailwaters of Lake Monroe.  On April 2 we will be hosting our Spring Sampling Blitz to collect samples from 125 stream sites throughout the watershed just as we did last September.

What happens next?  We will use the results to calculate how much of each pollutant (sediments, nutrients, E. coli) is entering Lake Monroe.  Once we know how much is coming in, we can calculate the reduction needed to reach water quality goals.  We will also identify critical areas using the relative contribution from each tributary along with our field observations.

Based on this information, we will begin strategizing this summer for how to improve water quality.  The strategy could include:

Nine months from now we will have a complete watershed management plan and be ready for implementation! 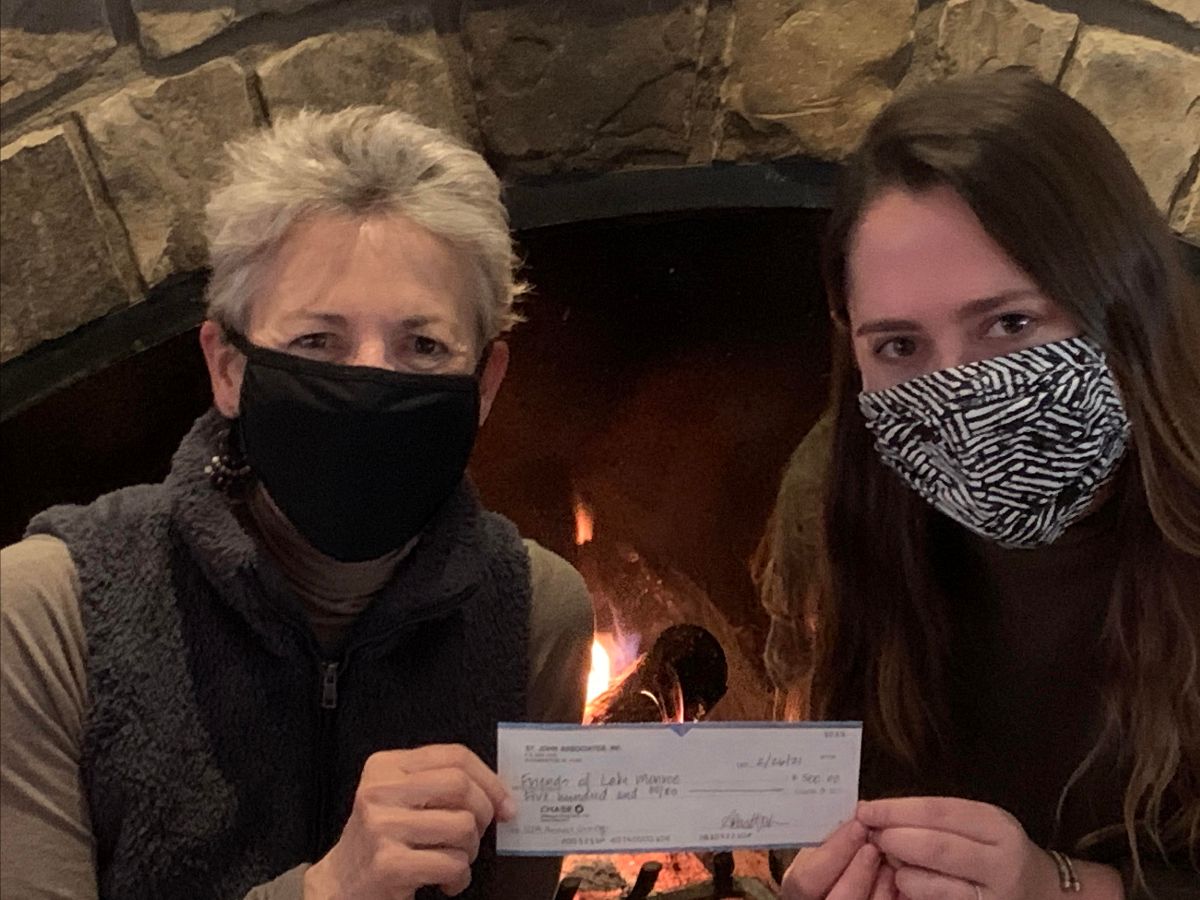 Alex St John (on right), President and CEO of St John Associates, presents Mary Madore, membership coordinator of the Friends of Lake Monroe, a check for $500.

Every Valentine’s Day, the Bloomington company gifts selected non-profits they wish to support. What a helpful Valentines gift this is! 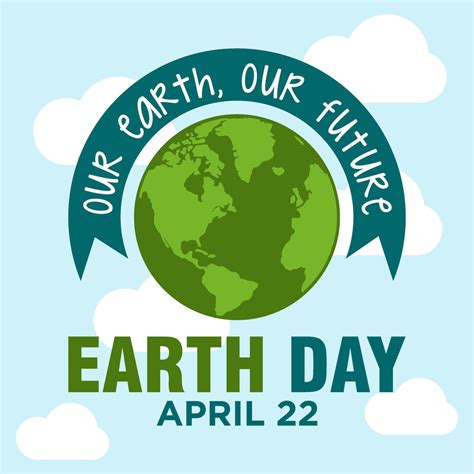 Earth Day is approaching.  How will you celebrate?

Here are suggestions from Friends of Lake Monroe: 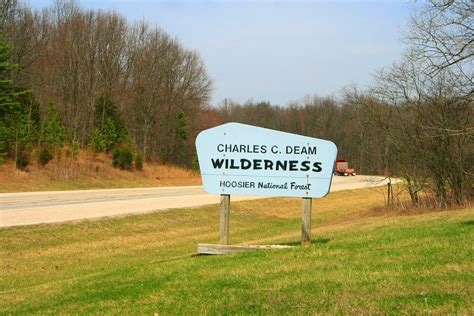 Looking for a fun project for Earth Day?

The Hoosier National Forest is sponsoring a work day on Earth Day, Thursday, April 22 to help rehabilitate shoreline areas in the Deam Wilderness Area, and the Friends of Lake Monroe is helping to recruit volunteers for the effort.

The Deam Wilderness, located in the Lake Monroe watershed, is Indiana’s only designated wilderness area, and we are fortunate to have this gem in our backyard.

Volunteers will be assigned to one or more of the following tasks:

Due to the isolation of the targeted shoreline area, volunteers will be ferried to the work area by pontoon boat from the Two Herons marina, located at the Cutright State Recreation Area on the south end of the Lake Monroe causeway.

Due to Covid-19 considerations, volunteers will be asked to mask-up when social distancing cannot be maintained. 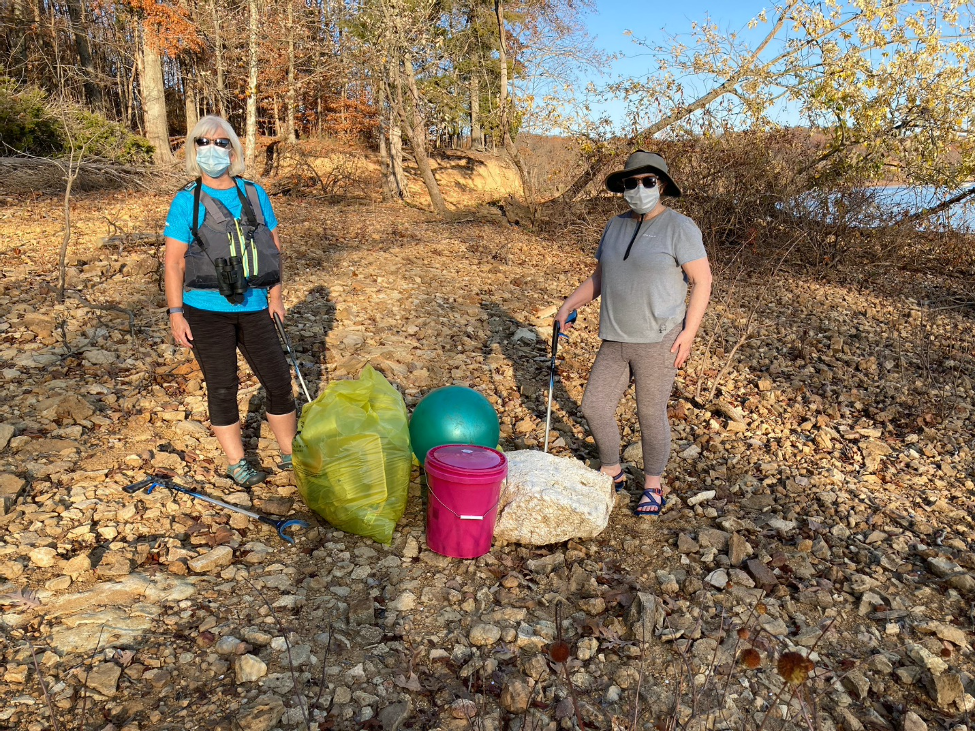 Looking for other ways to volunteer?

In April, Friends of Lake Monroe will resume our monthly shoreline cleanups at Paynetown State Recreation Area, under the State of Indiana DNR’s Adopt-A-Shoreline program.

This is a great way to meet other members while supporting the lake we all love by cleaning up trash.

Meet at the Recreation Area’s campground store.  Be sure to tell the gate attendant that you are participating in the cleanup to get free admission to the property.

Rugged shoes and gloves are recommended. Kids under 16 need to be accompanied by a responsible adult.

Please register on our events page (https://friendsoflakemonroe.org/events/) so that we can notify you of any changes in the event of inclement weather. 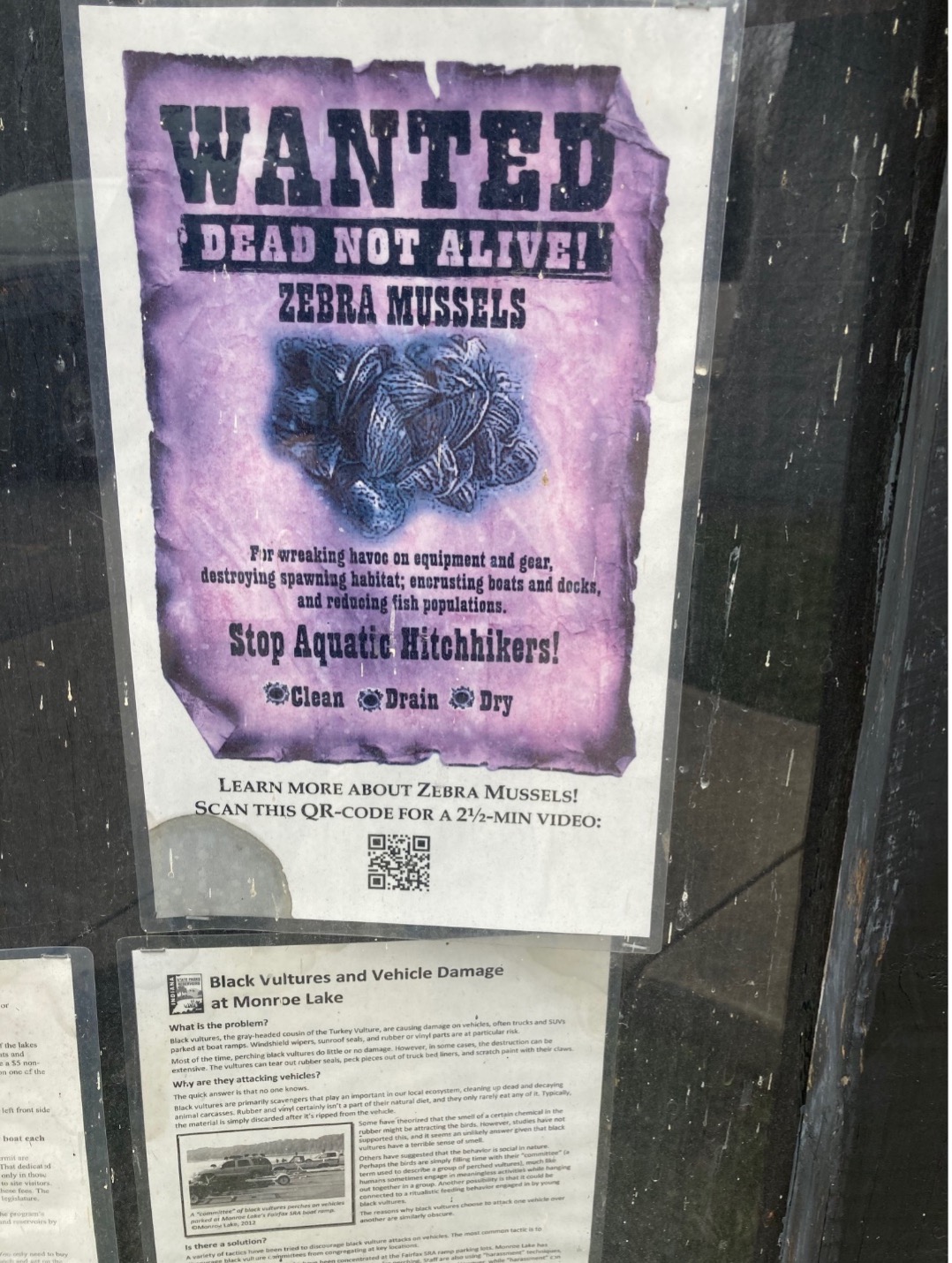 Recent articles in the Bloomington Herald-Times (March 15, 2021, pg. A3), the Indianapolis Star, and publications across the country reported that invasive zebra mussels have been found in aquarium “moss balls” sold in pet stores in at least 30 states across the country, including Indiana.

Moss balls are a product that aquarium owners use to generate oxygen and remove nitrates from aquarium tanks, and the zebra mussels are hitchhiking in the moss balls. The discovery of zebra mussels in moss balls bound for home aquariums may seem harmless, but it demonstrates how invasive species can easily be transported around the country and pose a threat to freshwater ecosystems.

What are zebra mussels?
Zebra mussels (Dreissena polymorpha)  are a penny- to quarter-sized crustacean that can be identified by their alternating black and white stripes. They also have a distinctive tuft of fibers called byssal threads growing through the hinge of the mussel that is used to attach to hard surfaces.

Zebra mussels are native to the Caspian Sea region of Russia, and were first found in the Great Lakes in 1988, believed to have been discharged through ballast water from large transport ships. The invasive mussels quickly established themselves in the Great Lakes, and within a few decades, have been found in at least 28 states, mostly east of the Mississippi River and concentrated in the upper Midwest, including about 100 lakes and rivers in Indiana.

Fortunately, zebra mussels have not been found in Lake Monroe to date.

Threat from zebra mussels
Once established, zebra mussels pose a huge ecological threat to fresh water lakes, rivers, or streams. The U.S. Army Corps of Engineers has referred to the zebra mussel as “the most troublesome freshwater biofouling organism in North America.”

Female zebra mussels can release 500,000 to one million eggs in a single spawning season, and quickly grow their numbers and overwhelm native species. They have few natural predators, and are virtually impossible to eradicate once fully established.

Zebra mussels are filter feeders, and each individual can filter up to a liter of water per day. In large numbers, this can remove phytoplankton from the water and disrupt the food chain and reduce the population of higher-level species.

Ironically, zebra mussels do not eat blue-green algae, thus providing the algae with a competitive advantage and increasing the likelihood of Harmful Algal Blooms.

And because zebra mussels are filter feeders, any toxins present in the water can bioaccumulate in their bodies. Although they aren’t a significant food source to predators, when the mussels are eaten, the contaminant concentration increases through the food chain.

In order to survive, zebra mussels must attach themselves to hard surfaces. This could be anything from manmade objects such as water intake, irrigation, or discharge pipes, boat and motors, and deck piers, to other species such as crustaceans or turtles.

Once inside water pipes, zebra mussels layer on top of each other, restricting or completely blocking flow. Once attached to another species, the host animal loses its ability to move, feed, breathe, or breed. There are examples in the literature of native mussel populations steeply declining due to dense populations of zebra mussels.

There are also potential recreational impacts from the presence of zebra mussels. Beaches may be impacted by the sharp shells that wash up in shallow areas, which can cut bathers and litter beaches. In significant numbers, decomposing mussels can create obnoxious odors. Zebra mussels can attach themselves to boat hulls and increase drag and reduce speed and increase fuel consumption in motorized boats. They can also clog engine cooling water intakes and potentially damage the engine.

How are zebra mussels spread?
Within water bodies, tiny zebra mussel larvae are spread by water movement. Juveniles also have the ability to detach themselves from hard surfaces and migrate downstream to find a new home.

So far, no zebra mussels have been found in Lake Monroe. Help keep this valuable resource free from zebra mussels and other invasive species by practicing responsible recreation.

Information in this article was obtained from the website of the Indiana Department of Natural Resources and Stop Aquatic Hitchhikers!, and through a conversation with Eric Fisher of the Indiana DNR Fish and Wildlife Division.

To Zoom or not to Zoom…. 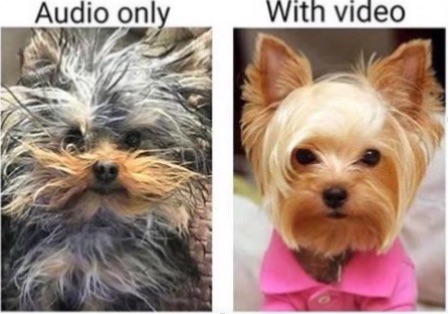 Ways To Get Involved With FLM

Become a Member!
For those interested in financially supporting our work, memberships are available at the individual ($20), family ($50), supporting ($100), and sustaining ($250) levels.

Donate!
Donations can be made on our website at www.friendsoflakemonroe.org.

Participate in the Monthly Meetings!
Our public meetings have usually been held in Bloomington at Monroe Public Library, 303 E. Kirkwood Ave.  In the interests of social distancing, the March 2020 meeting has been cancelled, but once we are able to resume — either in person or on-line — we will announce the meeting and hope to see you!

Join One of FLM’s Committees!
We are looking for volunteers to serve on these committees.

Clean the Lake!
Get together with friends at the lakeshore for our monthly contribution to picking up harmful plastics and other debris.

Share Your Enjoyment of the Lake!
Share a picture of Lake Monroe to show its beauty and to celebrate people enjoying and maintaining it.
Share events and news on our Facebook page: “Friends of Lake Monroe.”  Over 400 users have “Liked” our page! 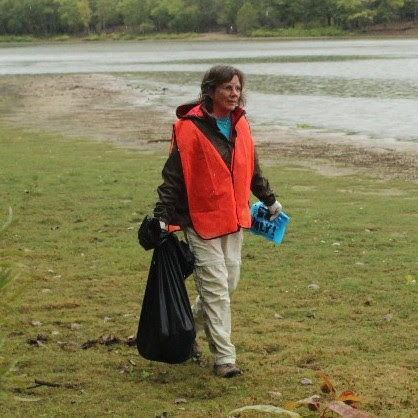 Friends of Lake Monroe is an incorporated 501(c)3 nonprofit organization. We run solely off volunteer support and public donations from people like you.